John Legend and his campaign #FreeAmerica has released a new video telling the story of a woman who got a felony for stealing a sandwich. Like millions across this country, Jill Jenkins was arrested and thrown in prison for a minor offense.

Years after getting out of prison and completing drug treatment programs, Jenkins was haunted by the felony on her record. This prevented her from accessing services, and made it harder for her to find housing and employment. For many years her past defined her future, until last November when California voters approved Proposition 47. 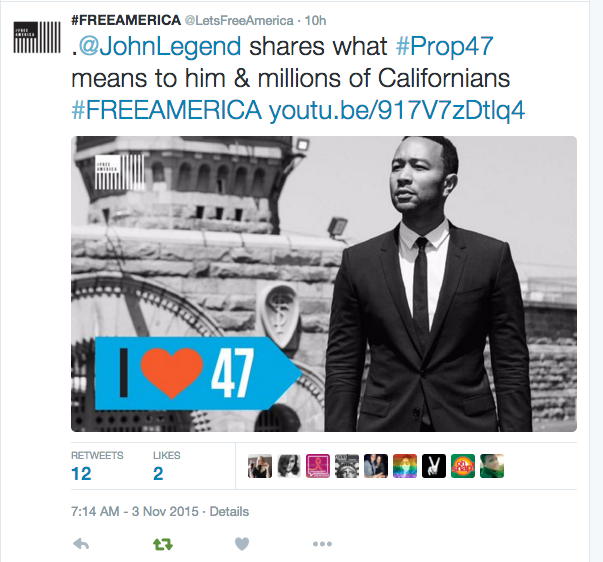 “I believe in Proposition 47 because I believe we are not the sum of the worst thing we have ever done.” – John Legend

Prop. 47 is the most significant criminal justice reform in the past 30 years. It allows those with a felony conviction for certain low-level, non violent crimes to clean up their records. The revolutionary victory of Prop.47 is that it shifts resources away from incarceration and into communities and neighborhoods. The savings from reduced incarceration costs will be invested into drug and mental health treatment, programs for at-risk students in K-12 schools, and victim services.

Criminal justice advocates have put together a website that takes you step by step on how to expunge a felony from your record. Proposition 47 allows individuals to submit a petition to the local courthouse requesting a change to old criminal records. Visit myprop47.org to learn more.

John Legend is one more voice in a chorus of faith leaders, justice activists, community organizations, some law enforcement agencies, Democrats and Republican leaders who agree that the criminal justice system is broken. They agree that mass incarceration is not working and that investments need to be made in prevention and intervention.

However, the LA Times reported today that Prop. 47 implementation has been slow and that the counties need to “step up the pace” to ensure those coming out of prison are able to support their families and communities.

Tomorrow, November 4th community leaders, elected officials, and civil right groups will gather at Community Coalition in South Los Angeles to commemorate the 1-year anniversary of Prop.47. They share the stories of people like Jenkins whose lives have been changed and discuss a community agenda for public safety. 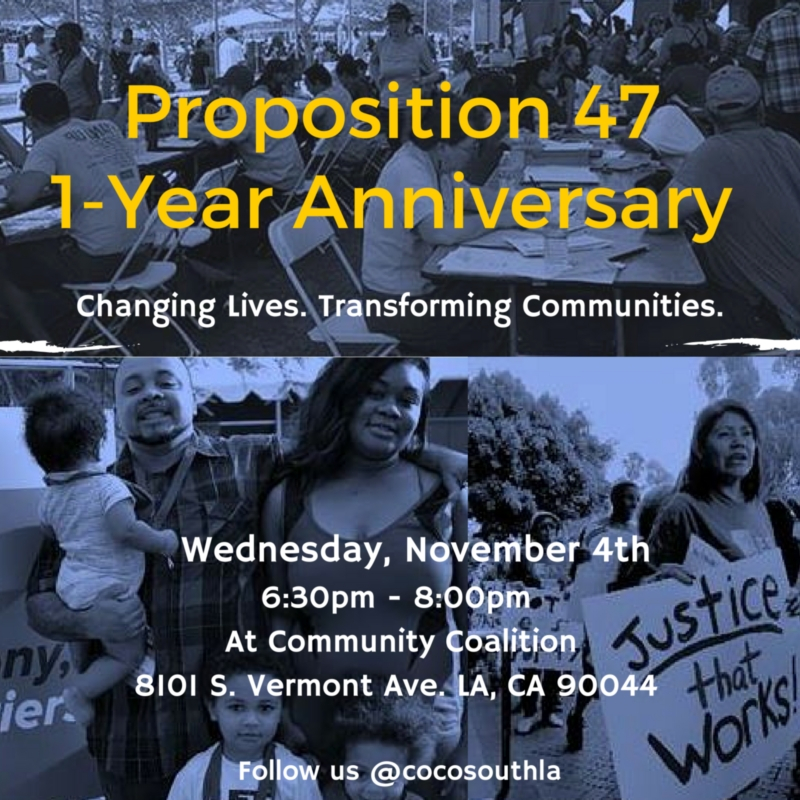 The post New Video Features John Legend But It Has Nothing To Do With Music appeared first on Community Coalition.

Where are the Resources for Prop. 47 Implementation?

Nearly a year ago, California voters overwhelmingly voted to pass Proposition 47 to shift public spending away from prisons, and invest in prevention and treatment strategies that work. Prop. 47 is the most significant criminal justice reform in a generation. Advocates of reform are asking: where are the resources to implement Prop. 47?

A central part of Prop. 47 was to use the savings (from not incarcerating people for low level offenses) to invest in community programs to help former inmates get back on their feet. A few weeks ago, private foundations and community organizations carried out a resource fair that became the largest outreach effort to help people released under Prop. 47 to get connected to services. Where was the support from the Los Angeles County? No where to be found.

Meet Tanya. For over 10 years, she struggled with drug addiction and alcohol abuse, but instead of getting treatment, she was sent in and out of prison. Now Tanya has been sober for five years, but she’s struggling to find a job, clean her record and to find permanent housing.

Tanya’s experience demonstrates the lack of support and services for the formerly incarcerated.  Even though, she has all the drive and will in the world to better herself, she’s have a very difficult time accessing services that will allow her to be a productive member of society.

In the 1980s at the height of the tough on crime policies, we saw an incredible increase in police presence, heavy investment in building new prisons, and an increase in public dollars towards mass incarceration. Today we ask: where are the outreach workers to help thousands of people like Tanya? Where are the increase dollars for treatment programs? Where is the political will to implement Prop. 47? Let’s not forget we, the voters approved Prop.47 and our county agencies are in charge of implementing our will.

The post Where are the Resources for Prop. 47 Implementation? appeared first on Community Coalition.

First, we express our deepest condolences to the families of the victims of the recent mass shooting in Oregon. Our thoughts and prayers are with all of you.

The aftermath of a shooting of this kind has become a story too familiar to all of US. The family of the shooter apologizing, victim’s families suffering, the Presidents traveling to the scene of the incident and an army of pundits debating gun control and the second Amendment. Many take to social media to express their frustration, people talk about during lunch at work, and politicians give press statements. Yet time and time again nothing gets done.

Comedian and TV host Stephen Colbert captures the feelings of millions of Americans frustrated over the explosion of gun violence. It’s a powerful reminder that something should and must be done. It is a call to be honest with ourselves and stop pretending that nothing could be done.

In 1971, President Richard Nixon identified drug abuse as a “public enemy number one” and declared a “War on Drugs.”  Rather than treat addiction as a public health issue, Nixon framed addiction as a criminal issue, setting the stage for a failed policy.

The United States now has over 2.5 million people in prison — more prisoners than China, Iran or Russia.  But with recent national, state and local efforts to reverse punitive policies, the tide may be turning.

Within the United States, California has been an incarceration leader.  Since 1962, when California had the same crime rate as today, twenty-two new prisons have been built.  California prisons are now bursting at the seams with an inmate population over five times higher than capacity.

As California teetered on the brink of a financial precipice, it stubbornly continued to spend over $62,000 a year per inmate, while simultaneously gutting education programs, human services and treatment programs.

Dismantling the Failed Policies of the “War on Drugs”

Most recently though, there has been a new emphasis on prevention, education and treatment versus incarceration.  Below is a short list of key policies and laws that will potentially reverse the “Get tough on crime” trend.

The law amended about 500 criminal statutes to eliminate state prison time for low-level offenses.  Instead, offenders are sentenced to county jail or to out-of-custody mandatory supervision.   According to the California Department of Corrections, “[AB 109] is the cornerstone of California’s solution for reducing the number of inmates in the state’s thirty-three prisons.”

The U.S. Sentencing Commission voted to slash the sentences of 46,000 inmates serving time for drug offenses.

Municipalities and counties across the country are embracing “diversion programs” as an alternative to incarceration.  Los Angeles County just approved a $20 million program to divert people with mental health disorders to treatment centers, rather than jails.

The “War on Drugs” resulted in police sweeps, suppression and mass incarceration.  It fueled racial profiling and antagonized community-police relations.  It ripped thousands of families apart and bankrupted school budgets.

But California has yet another opportunity to continue to correct the course on corrections and support education over incarceration.  This November, voters will decide the fate of Proposition 47.  If passed, hundreds of thousands of formerly incarcerated Californians may have their records expunged, 10,000 state inmates may be released, and $1 billion dollars will be redirected to education and treatment over the next five years.  Let’s make history. Visit www.unitedforprop47.com to get more information on how you can volunteer for Prop 47.

“I think Prop 47 is going to help people like me and others with turning their felonies into misdemeanors… and hopefully give us a better opportunity in life. If it is a non-violent crime, we should definitely have a chance to clean up our records.  If we’ve done our time, why not give us a second chance to do something better with ourselves and stop holding us back?  We have kids to feed. We have families that are in need.
Having a felony on my record has affected my employment opportunities. I’ve really tried to better my life since I got out of prison.  Hopefully, Prop 47 can help people like me expunge their felonies and find some positive employment.

People who find it difficult finding a job end up saying [forget] it and go back to what they were doing before because it’s so hard for us to get a job.  Expunging a felony could help us and help keep our family together.”

“Our broken prison system is taking money away from our education system and that’s just not right.  We spend $62,000 a year per inmate, but only $9,000 per student.  I think that money could be channeled into something much more useful, like into schools that lack resources.  It could provide more college prep courses, advanced placement courses, scholarships, counselors and support services that a lot of South Los Angeles schools lack.

If schools got these extra resources, I think it would help send more kids to college.  Having more counselors would allow them to actually sit down with each student and provide real support. I’ve seen more than ten of my friends drop out since ninth grade and I know that if they would have had more support at school, they could be seniors right now, just like me.

Putting money into prisons instead of schools is just backwards.  We need to be investing in young people who are our future.  Prop 47 is a start towards getting our priorities right.”

“Prop 47 is not just important to me but it’s important to my community and the population of women that our clinic serves.  I’m an ambassador for Women’s Community Reintegration Services.  We’re the only all-women’s mental health clinic in L.A. County and we’re also part of the jail linkage system in the Lynwood women’s jail.

Prop 47 will give women who have been arrested for minor offenses the opportunity to come back to the community and qualify for support, like food stamps and housing, so they can get their lives back on track.

So Prop 47 is not only important to me, it’s important to you, your community and future generations.  We can’t let other communities decide this vote for us.  You have no right to complain if you don’t get out and vote.  So let’s get out and vote and make change!” Visit www.unitedforprop47.com to hear other Prop 47 stories.